Of all the iconic names associated with the motor vehicle industry, there are few that symbolise what the car’s impact on the world has been as much as Volkswagen, or VW as they’re often referred to. This German manufacturer has been making vehicles since its conception in 1937.  In the years since, Volkswagen, meaning ‘People’s Car’, has grown from its roots in Nazi Germany, to become one of the most popular and most well-regarded manufacturers in the world.

Over the last 80 years or so, VW has created a stream of iconic vehicles from the original Beetle, their legendary Camper Van, known officially as the VW Transporter, right through to the modern age with the Golf GTi, Scirocco and the relaunched, reimagined Beetle, but that popularity comes at a price though.

The VW Golf alone is the 4th most stolen car in the UK, not surprising since it’s also one of the 10 best-selling cars in the UK in 2022.

PROTECT YOUR VW WITH A CAR TRACKER

Whether you’ve bought a brand new VW or a preloved one, you’re going to want to protect it and the best way to do that is with a car tracker. It can be daunting sifting through all the terminology and myriad of feature-sets, trying to work out which one suits you and your vehicle the best, especially with so many to choose from.  Thankfully, that’s where Infiniti Tracking excels!

We’ve put together two of the best VW car trackers available to help you out, all of which are approved by Volkswagen themselves. Starting with…

Whilst the impact of not protecting your car is large, this tracker is one of the smallest out there but still packs some real power. The S7-ATS from Meta Trak isn’t just an incredible tracker from a highly-regarded company, it’s also approved by Volkswagen themselves. If you’re looking for a Thatcham and insurance-approved tracker, then this should definitely be on your radar.

Rated as S7 by security researchers Thatcham, the S7-ATS comes with all the features you would expect including a 24-hour control centre that helps monitor the location of your car at all times. The trackers also come with its own smartphone app that gives you access to real-time, real-world data and alerts including journey history, low battery, tamper and motion alerts. All designed to give you peace of mind that your car is where you left it and if not, exactly where it is so it can be recovered quickly and easily. 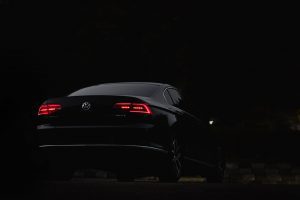 Vodafone might not be a name you immediately associate with car trackers, but their Automotive decision makes some amazing systems, including this Protect and Connect device. It meets Thatcham’s highest S5 criteria for car security so you know you’re getting something special. It’s also another system approved by the good people at VW.

Being a S5-rated system means that it comes with some features you won’t find on S7 trackers including Automatic Driver Recognition (ADR) tags. These fantastic pieces of technology give you even more control. Designed to be kept on your person, they transmit an encrypted wireless signal unique to your vehicle. Essentially, this means that your car will only start when these tags are within range of the vehicle, if not, the car remains immobilised. If an attempt to start the car without a tag being present occurs, the alarm will be triggered.

In addition to ADR, you get all the alerts and notifications you would expect including low battery and disconnection alerts and even blocking alerts. All these features and more are easily managed with its dedicated app and backed up by their 24-hour control centre.

It’s worth pointing out that if you’ve bought a new VW, then you’ll already know it comes with Volkswagen’s own We-Connect app. You might think that this negates the need for a car tracker, but that’s not the case. It’s true that the We-Connect app can help you find your car, but it’s really more aimed at locating it in a huge car park; it’s called ‘Parking Position’ after all. Yes, it can find its location, but it relies on you actively checking the app. This won’t be much use if you’re away, or asleep, and the first time you realise your car’s been stolen is 8 hours after the fact.

⚬ Choose from a full range of Thatcham and insurance-approved trackers for all cars, motorbikes, motorhomes and vans.

⚬ If you change your vehicle,easily transfer your tracker from your old car to the new one.

Whether you have a Volkswagen or any other type of car for that matter, we are sure to have a car tracker that meets your needs. Take a look at the fantastic range of products we have in our online store and, when you’re ready to take the next step, or just need a friendly, knowledgeable voice to talk to help you choose, give our team a call on 0141 266 0082. We’re open 9 am – 6 pm, Monday to Friday, and we’d be delighted to help you. We also offer nationwide installation delivered at a time and place to suit you whether you drive a VW or not!

About the Author: Gary Michaels