Can An Apple AirTag Be Used As A Car Tracker?

Home/Infiniti Posts, Blog/Can An Apple AirTag Be Used As A Car Tracker?

Can An Apple AirTag Be Used As A Car Tracker?

Apple introduced the AirTag in April 2021. This iPhone accessory was designed to integrate within the Apple ecosystem. The AirTag is a small, circular token, about the size of a 10p piece, and was intended to be used to help you track down your keys, wallet or anything else that’s easily lost.

By attaching it via a separate accessory (this is Apple after all), or otherwise secreting it within an item, you can track down the AirTag an whatever it’s attached too using your iPhone, its Bluetooth connection or its Ultra Wideband technology utilising Apple’s ‘Find My’ network. So far, so good.

Whilst its main purpose is to help you find those things you often misplace, like your car keys or wallet, can it be used for other things? Can it, for example, be used as a cheap car tracker? Let’s take a look.

With car theft on the rise, harnessing whatever technology you can to help keep your possessions secure is common sense. It stands to reason that putting an AirTag in your car should help you locate it if it’s stolen. It sounds logical, but sadly that’s not the case. The limitations on the AirTag means that it’s not suitable, and here’s why.

Let’s start with the headlines.

The reasons why it sounds possible. The battery in a new AirTag lasts about a year. It pairs easily via Bluetooth with your iPhone, so you can ‘own’ the tag on your Apple ID. Whilst Bluetooth obviously has a limited range (about 30 metres or so), the AirTag also utilises Apple’s ‘Find My’ network, something that is already used to pinpoint your iPhone, iPad, AirPods or Apple Watch if you misplace them.

So, if your AirTag is paired with your phone, the AirTag is hidden somewhere in your car and the car is stolen, you should be able to find it using these features right? Well yes….. but. 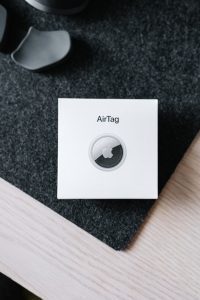 Many of the safeguards within AirTag are the same ones that actually work against using it as a car tracker. Once of the concerns when the AirTag was released was around potential stalking incidents. What if someone placed an AirTag into the coat pocket or bag of someone else? Could they then track that person to their home or place of work? Apple had obviously thought of this (thankfully).

If this occurs and someone else’s AirTag was near you (or rather near your iPhone) for an extended period of time (around 24 to 72 hours), you would be notified that you were in constant range of a device your iPhone was not paired with. It will also begin to emit a noise after awhile. Another good safety measure to address issues of stalking. Now let’s imagine the same thing happened in your stolen car.

Eventually, the thief (assuming they had an iPhone, which let’s face it, most of us do) would get a notification that they were in contact range of an AirTag that wasn’t theirs. That would be their first inkling that something was amiss and they would start a hunt for it. If they couldn’t find it visually, eventually, the AirTag would start to make a noise, making finding it much simpler.

In addition, if they had one of the latest iPhones (11 or later), thanks to the Ultra-Wideband chip inside it, they would be able to find the AirTag exactly, thanks to visual cues on the iPhone that would pinpoint it to within a couple of centimetres.

Whilst there’s no denying the impact Apple has had on the consumer electronics market, using an AirTag as a car tracker simply isn’t a viable solution.

AirTags don’t include many of the features that come with most car trackers. Things like a connection to a 24/7 control centre monitored by dedicated staff who will liaise with the police to help recover your vehicle, like all Thatcham-approved trackers do. Nor do they have the ability to immobilise your vehicle if not in range of the car, like a Driver ID tag can.